Winter is coming: the nights are drawing in and in the Northern Hemisphere the hours of darkness already outnumber the hours of daylight. Research has shown that darkness produces a big fall in the number of people out walking – and a major reason for this is that people feel less safe walking in the dark.

There may be an evolutionary explanation for why people feel less safe at night – we can’t see as well, and this may have exposed our ancestors to greater threat from predators. Nowadays, it’s not so much the prospect of being eaten by a savage beast that concerns would-be pedestrians, but the fear of being mugged or victimised.

Some studies suggest that new outdoor lighting can reduce crime rates in an area, but there is conflicting evidence on this. A large review of research found a link between new lighting and reduced crime rates, but improvements were seen in daylight as well as darkness, suggesting that street lighting is not the only factor. This review has also been criticised by other researchers, and a large statistical analysis found no link between crime rates and switching off or dimming street lighting at night. 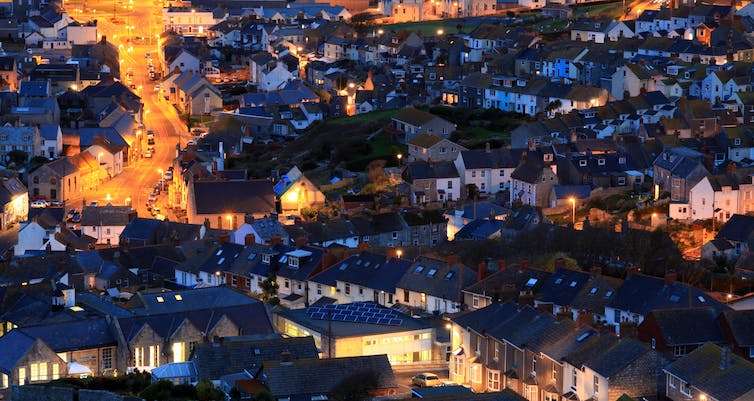 Street lights may or may not have an effect on crime, but one thing’s for sure – brighter levels of light do make people feel safer when walking at night. This can lead to a significant increase in the number of minutes people spend walking each week. It can also reduce the number of people who avoid leaving their homes at night, reduce social isolation, improve physical and mental well-being and increase community pride.

Street lighting can improve the quality of neighbourhood life by making people feel safer – but, even so, it would be unwise to flood our streets with light at night. Street lighting costs money: the UK’s annual bill is estimated at around £220m. Artificial light at night may also have a negative impact on wildlife and the natural world, for example by stunting the growth of frogs and toads and preventing them from laying their eggs.

The skyglow from street lights also means we rarely get to see the true wonder of the night sky, frustrating astronomers and limiting our appreciation of the natural environment. For these reasons, lighting should be used selectively and efficiently – and this requires good guidance to help those responsible for installing and maintaining our street lighting.

The guidelines for street lighting in the UK and many other countries are currently based on questionable evidence. That’s why our lighting research group at the University of Sheffield undertook a programme of research to find out how lighting relates to feelings of reassurance after dark, and improve the evidence on which lighting guidelines are based.

In one recent experiment, we asked people to walk along a number of streets in the city of Sheffield at night and rate how safe they felt. We also asked these people to walk and rate the streets in the day, to create a baseline measure of safety and to account for biases that may occur if safety ratings were taken only after dark. 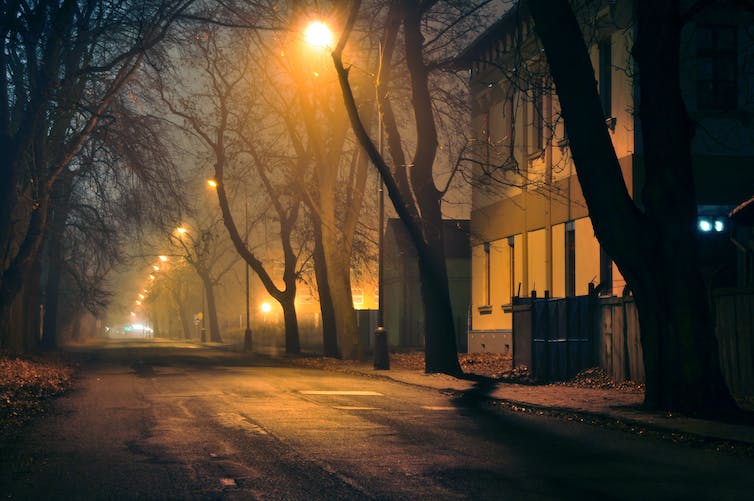 Would you feel safe? (Shutterstock)

The difference in safety ratings between the day and night walks told us something about the lighting on that street – the smaller the difference between day and dark ratings, the safer people felt due to the lighting. We compared our participants’ different ratings against measures of the lighting on each street, including the average illuminance (amount of light falling on the street surface) and uniformity (how evenly spread out the lighting was).

Today, average illuminance is the main measure used when installing and evaluating street lighting. But we found that, while increasing average illuminance was linked with improved feelings of safety, uniformity was more important for making people feel safe. So it might be more important to have evenly distributed lighting, rather than bright lighting, to make people feel safer.

Local authorities are undergoing major changes to their lighting, as they replace the traditional orange sodium lamps with new LED lighting. These new LEDs are more energy efficient, which saves taxpayers’ money. They also give councils greater control over the lighting they provide, for example by dimming and switching off when there are no pedestrians about.

Used properly, street lights can improve people’s lives and help neighbourhoods come alive at night. But there’s still a lot to discover about how people respond to street lighting and the impacts it has on society and the environment – experiments such as these can help to light the way.

This article is republished from The Conversation under a Creative Commons license. Read the original article.

In case you want to change your privacy settings (e.g. issue consent or revoke an already issued consent) please click on the button below. Settings